On a consistent journey ¶

There is a significant difference between one edition and more than one.

The latter is about consistency (no matter how big is the actual timespan), the former is about an adventure.

You can learn about the start of the journey and origins of its name in the previous edition but for today I have some more thoughts and facts for you.

Take them with a pinch of salt. As Herman Hesse once said,

Words do not express thoughts very well. They always become a little different immediately after they are expressed, a little distorted, a little foolish.

1. Keeping on by dimsumthinking ¶

Daniel Steinberg is on an endless and very successful journey to set the hearts of folks on fire with his words, and this time the words are about persevering and persistence, which resonates with me deeply.

Don't focus on being a writer. Focus on writing.

If you write. You are a writer.

If you keep writing, if you persist and persevere, before you know it, you will have written.

2. Why It's Easier to Manage 4 People Than It Is to Manage 1 Person by Stay SaaSy ¶

I had good and bad managers; I've been a decent and a terrible one. This post is quite eye-opening when it comes to why:

Single reports are usually very junior, and a tandem of a junior developer and a very junior manager require way more effort from both sides than folks would usually expect. Good that it gets the visibility it deserves.

3. Appearances vs Experiences: What Really Makes Us Happy ¶

As I mentioned recently, I am moving house soon. My commute to the office is around 20 minutes by foot at the moment, and it will turn into 45 minutes or so (including some time in the Tube).

Why would I do that? A garden and a spare bedroom (i.e the office).

While a bigger garden and spare bedroom soon cease to be novel, every day’s commute is a little bit different, meaning we can never get quite used to it. There is a direct linear downwards relationship between commute time and life satisfaction, but there’s no linear upwards correlation between house size and life satisfaction.

Can't wait to prove them wrong. What's the point in walking to the office if you can't have a wooden pizza oven on your balcony?...

4. To Get More Replies, Say Less by Greg Kogan ¶

In case of Netlify cutting the length of emails by 90% resulted in a 700% increase in replies. Does it work with newsletters though? Next time I will send you a link to my Twitter instead.

5. From engineering to product management, and back again by Will Doenlen ¶

The main takeaways of becoming a product manager and then coming back to engineering. I think that it always boils down to

One thing I realized is that, as an engineer, I didn't always feel empowered. I felt like my role was just to code. But having worked as a product manager, I knew that it didn't have to be that way. I worked with engineers who had solid product skillsets and saw how empowering and useful it could be. Being actively involved in coding and defining the right user experience felt exciting to me.

A good engineer (designer, manager, you name it) gets empowered by users feeling less pain, frustration or confusion. It doesn't matter that much when it comes the actual way to achieve it as far as the goal is not mere writing code or moving button.

Lots of words have been said over the last weeks about the Apple's commission in the App Store and subtle mentions of other stores as a comparison. Luckily a few Ph. D.s embarked on a quest to actually compare it to the other platforms, from mobile stores to e-commerce and IoT.

Anything interesting? 30% is nothing comparing to 70% (Crossroads Trading, used clothes and accessories), or 50% (Twitch), or 45% (Youtube), but is pretty much the same comparing to anything else (e.g MIUI, Xbox, etc).

7. How a linguistic glitch tricks us into believing bank deposits are deposited in banks by Brett Scott ¶

This is a nice example of an old linguistic story.

If I take a jug of water and pour water into this glass, I'm depositing water into it. After I've done that, I might say there is a 'water deposit' in the glass.

Many people believe a 'bank deposit' is 'money I put into a bank'. But bank deposits are in fact money issued out by banks.

Something starts as an homonym, on its way gets affected by lexical implication rules but instead of the pastoral idea of "verbizing one's nouns" turns into a polyseme and conveys distantly related meaning which by now gets recognised by dictionaries.

I have many weapons of choice and yet whenever I have to stick to the ones most familiar I feel certain guilt as it could be a missed chance to learn something new.

On the other hand, there are right moments and places for such chances. Bootstrapping a startup is rarely one of them.

If I would have to pick a single most misused part of iOS, I would not hesitate.

The last point gives direction. The closer your splash screen gets to your first page, the smoother your app’s first impression will be.

Sadly it usually gets ignored in lieu of spinning animations, huge logos and other questionable decisions. Please do pay attention to the guidelines.

In English and Russian this very famous phrase from the marriage liturgy sounds like "Till Death Do Us Part".

In Hungarian, however, it's "Till Spade, hoe, big bell Do Us Part".

Why? The spade is to dig the grave, the hoe is to even out the hill, and the big bell rings at funerals.

There is even a wedding shop in Budapest called "Ásó, kapa, nagyharang".

I often heard this pasta to be referred to as the "bad girl's pasta", and thought it has something to do with Quartieri Spagnoli and brothels.

According to Cuomo, Petti's moment of inspiration came when — near closing one evening — Petti found a group of customers sitting at one of his tables.
He was low on ingredients and told them he did not have enough to make them a meal.

They complained that it was late and they were hungry, saying "Facci una puttanata qualsiasi," meaning "throw together whatever".

Multiple companies across the UK are recalling batches of zucchini seeds. Why? Cucurbitacins.

The bitter taste of some fruit is caused by an over-production of plant defense chemicals called cucurbitacins. This is mainly a problem in courgettes and summer squash and is caused primarily by a mutation within the plant. The problem is more likely when plants are grown from saved seeds, where inadvertent cross-pollination may have occurred [...]

4. This month in 1939: How dead cattle led to the discovery of warfarin ¶

The blood thinner Warfarin was synthesised in attempts to understand the reasons behind cows dying from eating clover. Adding more to it:

Its first approved use wasn’t as a medicine, however, instead being approved as a rat poison – a use it is still sold for [...]

term used by German-born physicist Albert Einstein to describe his unique approach of using conceptual rather than actual experiments in creating the theory of relativity.

Apparently Einstein popularised thought experiments by using them to come up with the "equivalence principle" (converted into formulas, the basis of General Relativity) and many other breakthroughs.

Until I came to the UK I didn't know about Marmite, a food spread made from yeast extract. It's an acquired taste, it's a by-product of beer, and despite being invented by a German scientist Justus von Liebig it was originally made in the United Kingdom.

However, this is a different story.

I knew about Marmite the spread till even last Tuesday.

What I didn't know was that in 1679 Denis Papin invented a pressure cooker and called it Marmite (fr. "pot"). He did it to take advantage of residues from the meat industry and turn them into edible jellies. 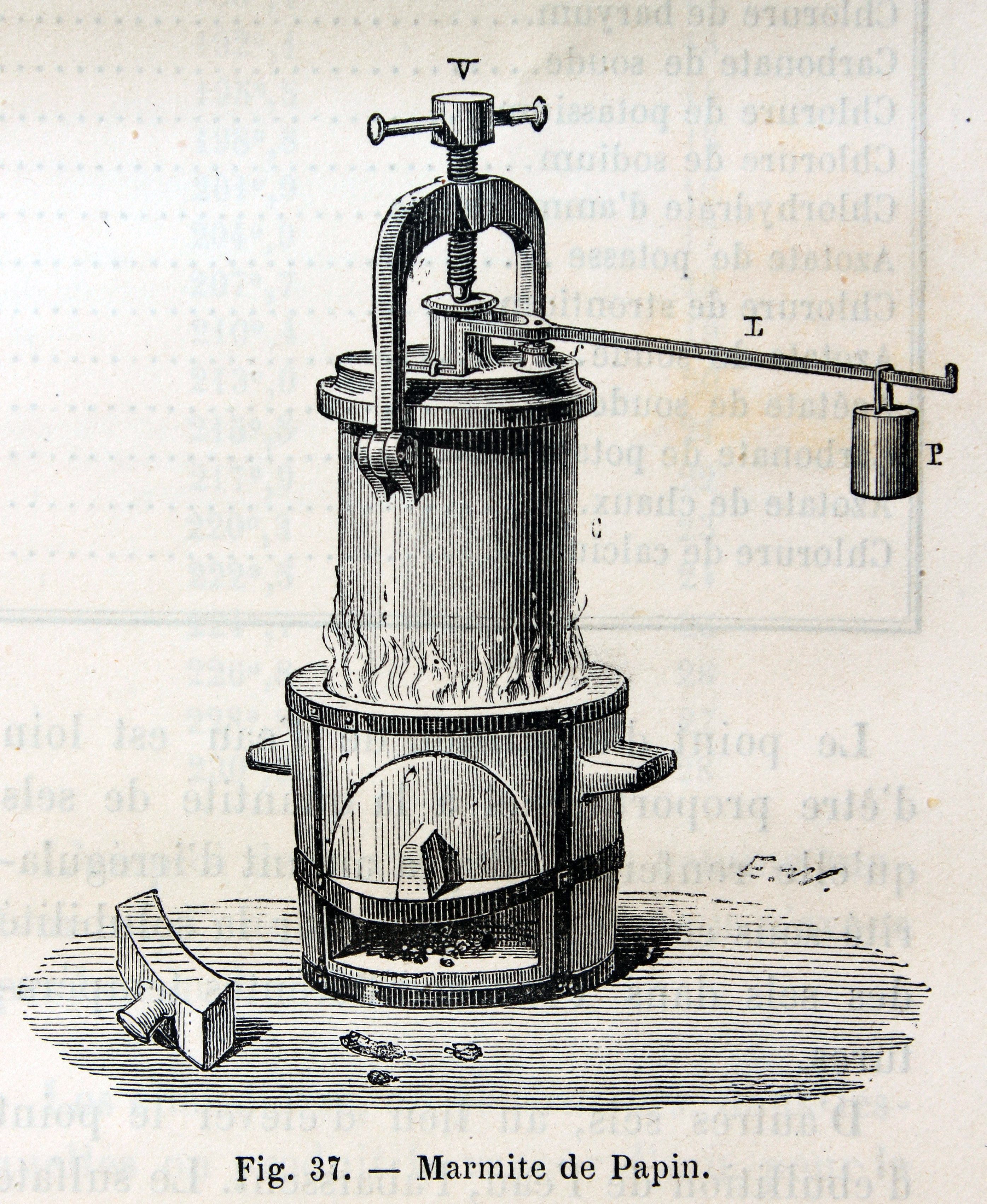 It was never commercially successful. Fast-forward 160 years, and some scientist builds on top of the pressure cooker, manages to concentrate yeast and broth, patents a bouillon cube, baking powder and a yeasty spread.

There is a Russian idiom "the man and the [steam]ship" ("человек и пароход") which is used to refer to someone very knowledgable and successful, usually in a very narrow field.

Apparently it's a very recent saying and was created by a poet Vladimir Mayakovsky who wrote a poem "To Comrade Nette, the Man and the Ship", and then popularised by Eduard Uspensky's novel Winter in Prostokvashino (in the form of "Kruzenshtern, the man and the ship").

8. An ear of corn has an even number of rows ¶

By the layman this has usually been regarded as one of Nature's curiosities, not necessarily to be explained in any way; but the botanist long ago found it to be the expression of a morphological characteristic of the whole tribe (Maydeae) to which maize belongs

I can't really comment on this except that I've read that paper in the middle of the night and found this being fascinating.

I was curious as to what's the origin of "french fries", and despite Belgians claiming that they have invented it but lost the name to French because Americans couldn't distinguish French-speaking countries from each other, it doesn't seem to be the case.

The common cooking verb "to french" doesn't have anything to do with it either:

By the way, the verb "to french" in cooking has come to mean to cut in long, slender strips, and some people insist that "french fries" come from that term. However, the French fried potato was known since the middle 1800s, while the OED cites the first use of the verb "to french" around 1895 [...]

I was reading "Because Internet" by Gretchen McCulloh and found this fascinating:

The same Latin-worshipping tradition was responsible for adding superfluous silent letters to words like “dete,” “samoun,” and “iland,” because “debt,” “salmon,” and “island” look more like Latin “debitum,” “salmonem,” and “insula.”
“Never mind that “island” doesn’t even come from Latin, or that generations of schoolchildren would now have to go to extra effort.
Many languages can’t have spelling bees because their spelling systems are so logical that no one would ever get knocked out. English spellers can only dream!”

Now think how hard it was to be an English in the era when formal writing was shifting over from Latin to English: Shakespeare, Milton, and many more were coming up with this false syntax to appeal to the legacy of writing.

These days I am just getting confused by occasional obscure phrasal verbs – such a time to be alive!