On returning to the North ¶

If I were to move out of the capital, I’d probably go North.

How much North is an open question, but I definitely feel more comfortable among those landscapes than I am in the South.

Some people say it’s grim up there, but it’s the honest grim, and there is nothing artificial to it, as people living among rivers and mountains don’t have time for flowery language and abundant small talk.

That being said, these days I am waking up with the sunrise (not a hard task given it’s February), look at sheep outside the window, have mutton for breakfast, walk among the same sheep and dine while thinking about the cyclic view of time. 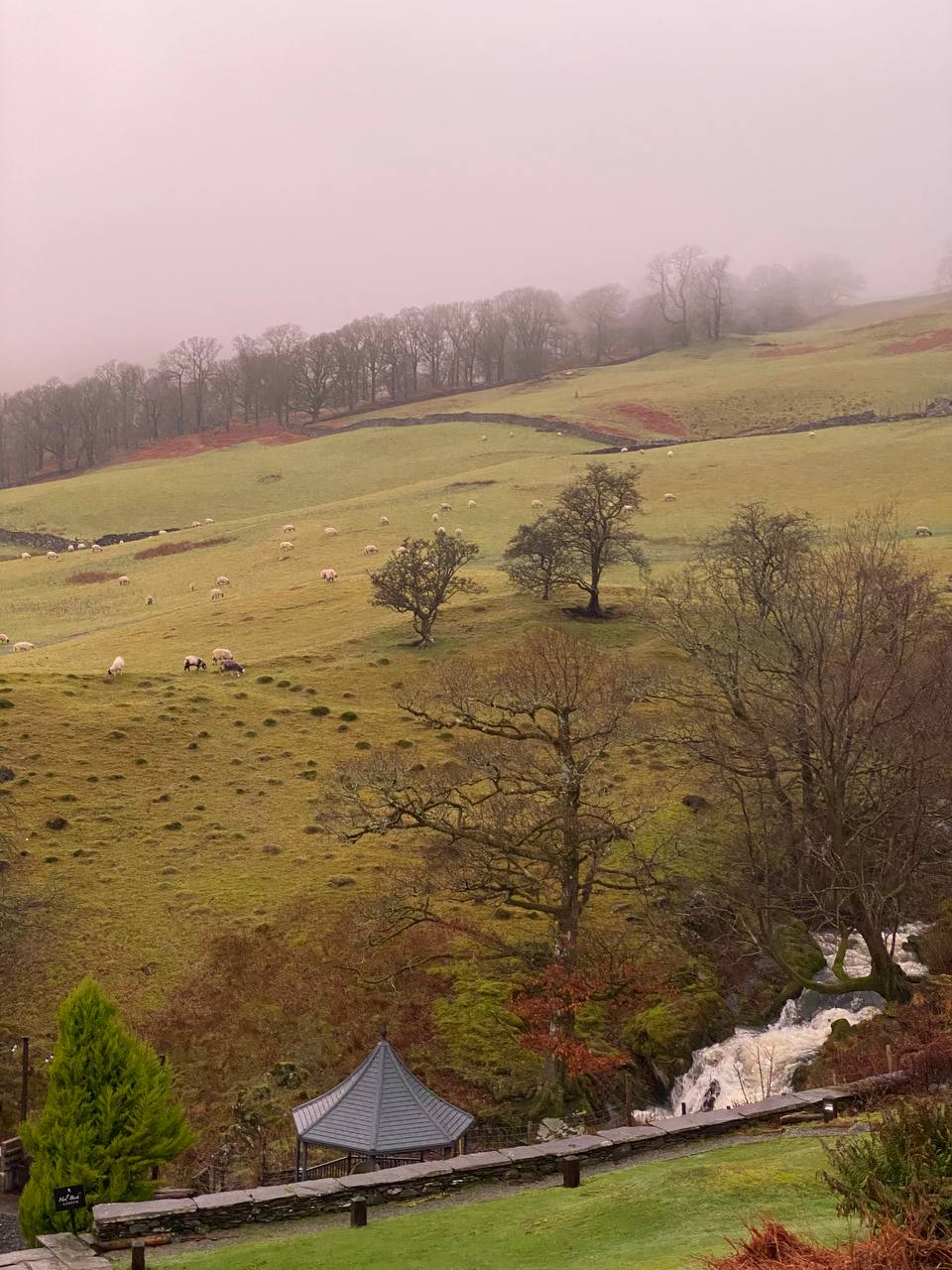 Also worth noting that folks in the North know their food. 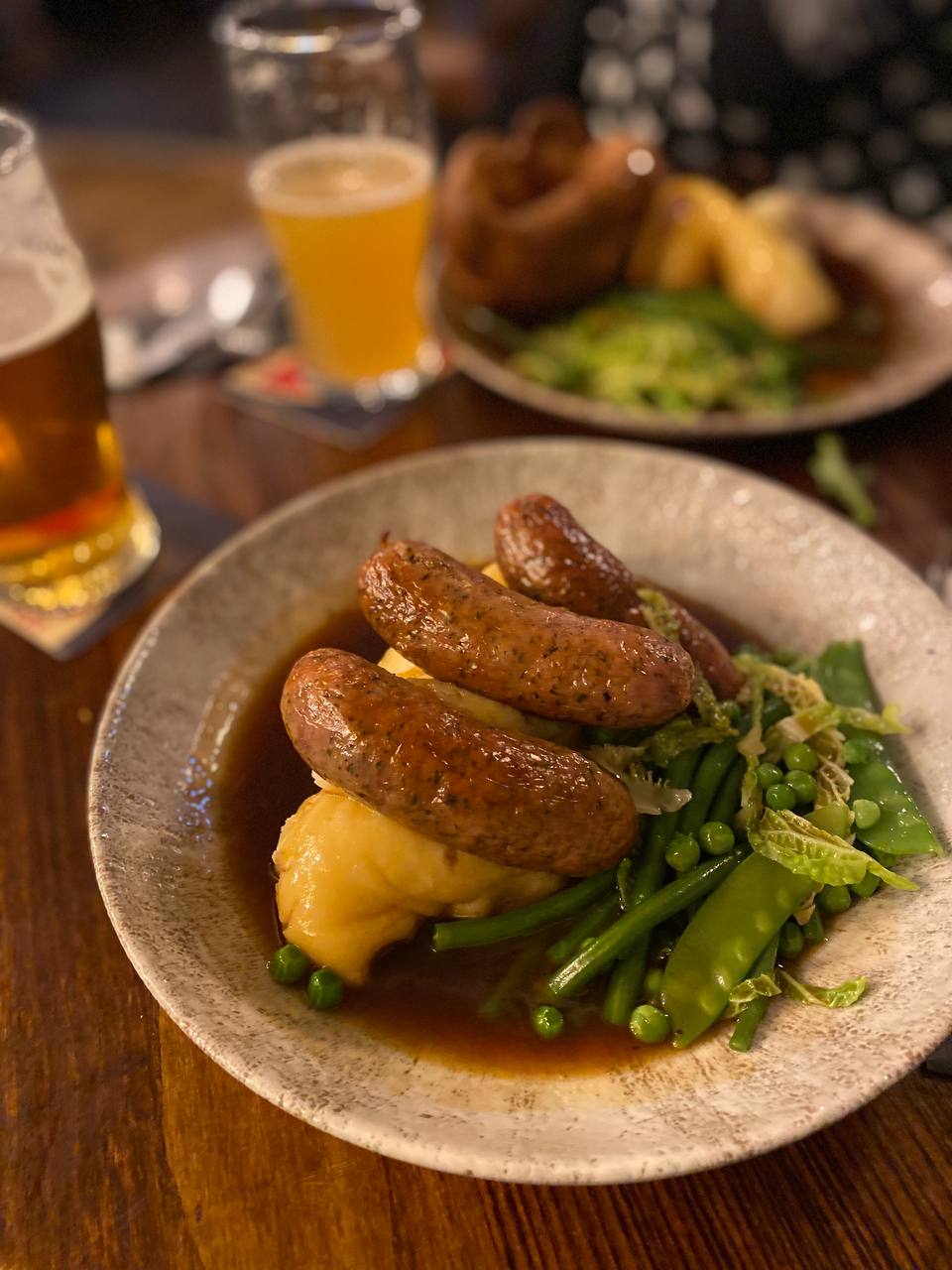 Or something a bit more thought-through, like a pasteurised and moulded oyster with sorrel granita: 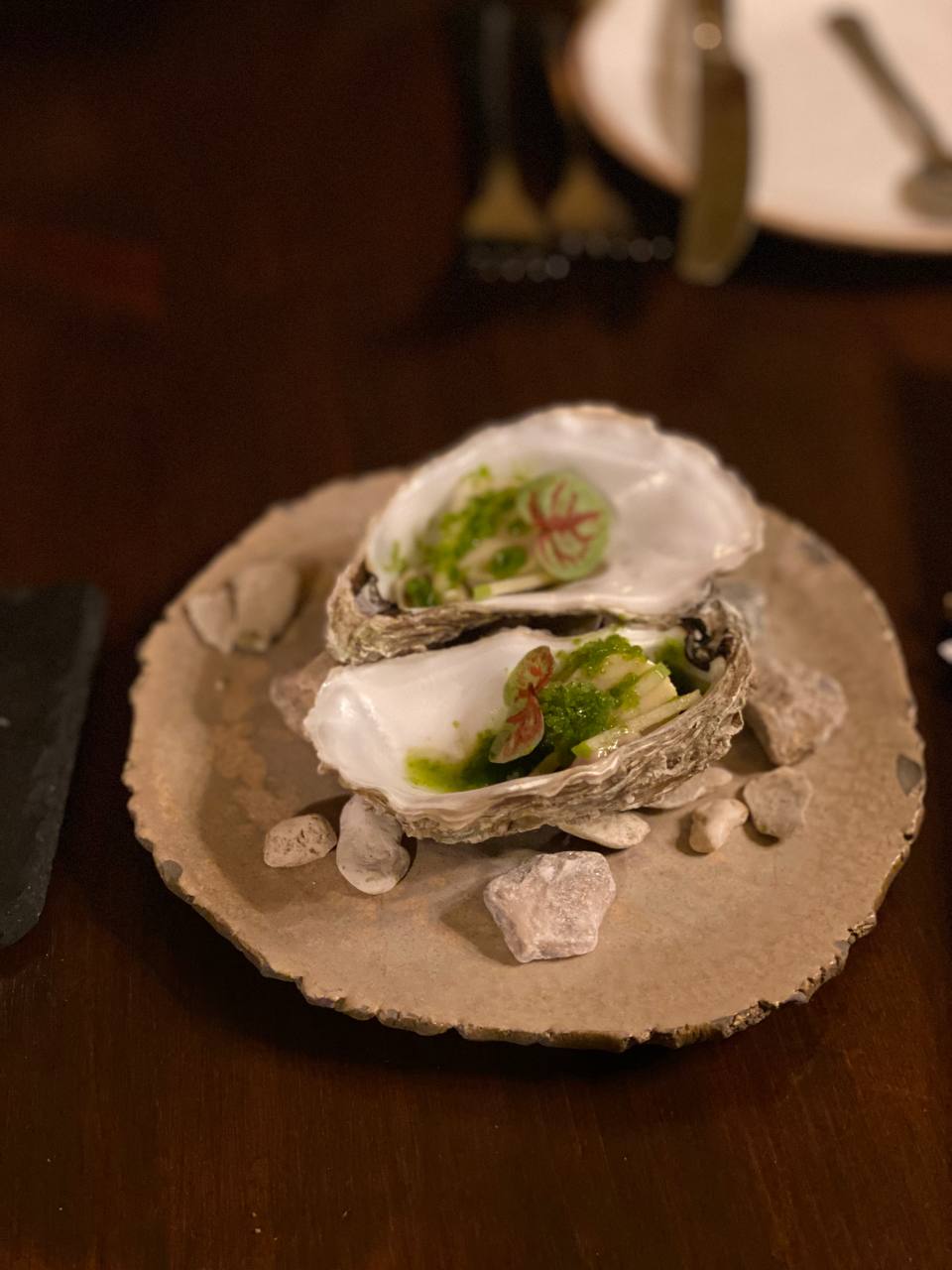 And this cabbage and oxtail choux farci: 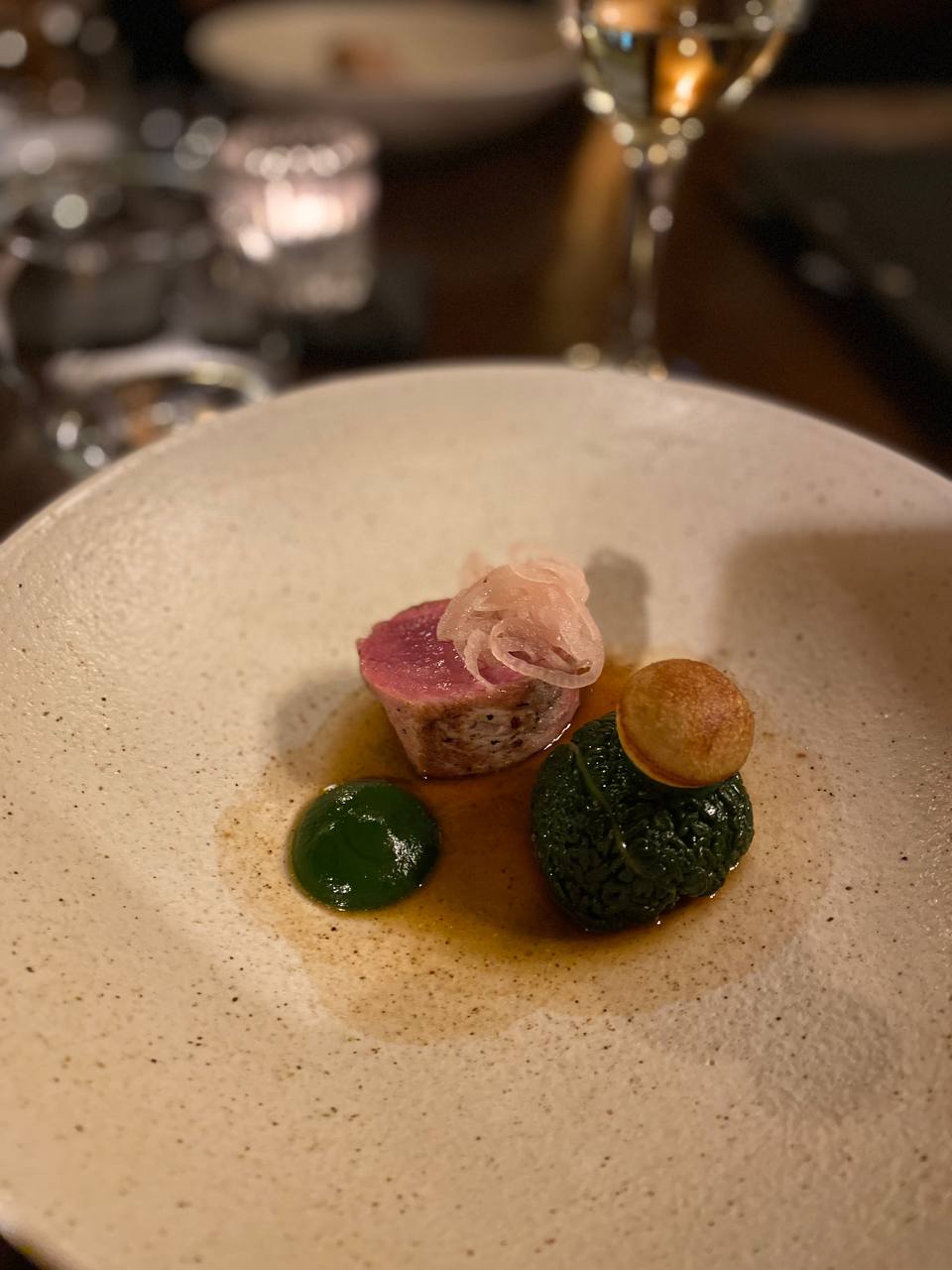 But now, without a further ado,

1. Some Conclusions About the High Desert After Five Months of Desert Life by Sasha Chapin ¶

To continue with the idea of moving out of a large city to something more deserted, a great essay reflecting on the inconsistency of things happening off the city.

So things happen inconsistently. Sometimes your needs are fulfilled instantly and perfectly. But, just as often, appointments are postponed, businesses close at arbitrary times, people don’t show up. You get over this pretty quickly, when you realize that it’s ridiculous to insist that you need landscaping done right this second. (You do not actually fully get over it.)

This lack of optimization extends, as well, to the way people live near you. There is a certain relaxedness. The other day, a couple of dogs we didn’t know were running around in our yard. We had no idea who to call. A guy came and picked them up in his truck a few hours later. He explained that they broke out of the yard of a woman down the road, and that this was the second time in a month this had happened. She didn’t want to collect them herself, she was tired. She has no plans on repairing her fence—she is not particular. The dogs won’t die of running around, they’ll come back eventually.

Being very inconsistent myself I would probably be more or less ready to deal with people taking their time. The only exception is when it is somewhat related to food: I didn’t yet learn to tolerate food being late.

2. Has Literature Ever Changed the Course of History? by History Today ¶

We tend to (or at least used to) read a lot, and usually books are celebrated as sources of answers to all possible questions. But do they actually have any influence on a bigger scale?

Poetry makes nothing happen, opined W.H. Auden. The greatest poem in English, Paradise Lost, has shaped many people’s understanding of Christian myth. It served as evidence that English could rise to the heights of Greek and Latin and therefore justified (along with Shakespeare) the invention of a national literature and culture during the 18th century. It was historically hugely important – but it is impossible to show that it changed history.

There are certainly books I would name if asked whether there was anything that shaped my thinking — but to go as far as changing one’s life and hence the history? Probably not yet.

3. The simple system I’m using to stay in touch with hundreds of people by @jakobgreenfeld ¶

This is a nice way (as well as the reasoning behind it) to automate the maintenance of one’s circles of friends and acquaintances.

The second action is a little custom script that automatically picks one random entry from the Potential New Contacts table and then updates the Reach Out and When to Reach Out fields for this entry. Of course, the script only picks from the list of entries that haven’t been picked before. This is why the Reach Out column is updated. Only records where the Reach Out column is not equal to “Yes” are used. Moreover, the script returns the record it picked randomly so I can use this information in the next step.

Personally I never bothered: even my closest friends probably could live for years without hearing from me, and yet if (when) we meet our conversations continue as if there was no break in between.

It doesn’t mean I won’t give a try to this approach though.

4. Why Are Letters Shaped the Way They Are? by @shayla__love ¶

In modern linguistics there are lots of things to question, and the alphabets being the building blocks of many languages are definitely the ones among the most common.

Language is most likely a mix of arbitrariness and iconicity, Perlman said, along with something called systematicity, when relationships form between words and meaning that aren’t necessarily iconic. (An example is words that start with gl- in English often are related to light, like glisten, glitter, gleam, and glow. There’s nothing necessarily light-like about the sound gl-, but the relationship is still there.)

What’s interesting about the research in the article is that they use games and apps to make data collection way more straightforward. That’s easily the future of pretty much any time-consuming research: these days pretty much everything competes for users’ attention, so less moderns companies need to adapt as fast as possible.

An interesting story about the way memories are controlled by anchors and feelings:

Then came the most delicious meal I had ever eaten ending with actual real coffee, as we rumbled across northern France. I also especially recall one of those enormous black French steam locomotives, like prehistoric monsters, which emitted an incongruous thin “peeeep!” like a bird startled on a pond. That France, now so easily recalled, has wholly vanished since. Modern France has almost no smell, when once it had many. Until then we had not really had coffee, just the strange instant version which my brother and I used to drink during school holidays in appalling quantities, heavily sugared, in the belief that we were being sophisticated. Possibly, as an experiment, I should recreate this rather revolting beverage, so as to summon out of the ground the lost years of my boyhood.

I often notice that the way I memorise things depends a lot on my mood and surroundings, whether these are visuals or noises. Sometimes it is pretty much impossible to remember something that felt extremely important a week ago — is it my age already?

I don’t drink tea or coffee with sugar so never really paid much attention to sugar in restaurants. Apparently over decades it went through lots of various issues:

During the Depression a tea room consultant advised proprietors who wanted to attract male customers not to use wrapped sugar cubes because “somehow they do not know what to do with that bit of paper.” Likewise, a columnist in 1941 pitied the tired businessman seeking a restaurant meal who couldn’t “dip his spoon into a good old sugar bowl.” Instead he had to fumble with unwrapping a cube and waiting for it to dissolve in his coffee, wasting time and fraying his nerves. Poor guy, who knew?

Maybe one day the same would apply to sauce bottles in burger joints?

A beautiful concept in linguistics:

Escher sentences are certain comparative sentences which initially seem to be acceptable but upon closer reflection have no well-formed meaning. The typical example sentence used to typify this phenomenon is More people have been to Russia than I have.

The explanation of its perceived meaningfulness is a mix between two totally logical templates, which just don’t work together.

Now the question is if that could be used in any beneficial way?

Who’d think that the military is behind one of the greatest human inventions? Or at least behind the right motivation?

The first McDonald's drive-through was created in 1975 in Sierra Vista, Arizona, near Fort Huachuca, a military installation, to serve military members who were not permitted to get out of their cars off-post while wearing fatigues.

The title is odd, but same might happen with a piece of meat wrapped into foil on a BBQ.

So how does a pan of lasagna become a battery? “An acid such as vinegar or tomato sauce and electrically charged atoms like salt form the electrolyte. Aluminum foil is one electrode, and the pan, often steel or different alloy of aluminum, is the second electrode. This causes the aluminum foil to pit and dissolve, and you shouldn’t ingest gravy filled with metal ions”.

Probably I should’ve paid more attention to physics back in school.

The name might be not the most romantic in the world, but the story behind this old broth replacement is quite romantic indeed:

But when Valentine emerged from the basement, he brought with him a potential cure that he’d cooked up. Knowing that Anne Maria couldn’t stomach solid food, but that she was in desperate need of nutrients, Valentine had concocted a tonic from beef juice and egg whites. The tonic was more effective than beef broth, he reasoned, because boiling meat for broth alters its proteins and leaves it “impaired in value.”

Check out the whole story though, as the guy was really well-versed in marketing.

Somewhere deep inside I treasure my roots and respect anyone foraging their own food.

Probably just picking some common and known (to me) berries won’t make me gasp in awe, but this week I was reading about edible things possible to find in local forests and that was lots of fun, thanks to this small book Sasha picked up at a charity shop some time ago. 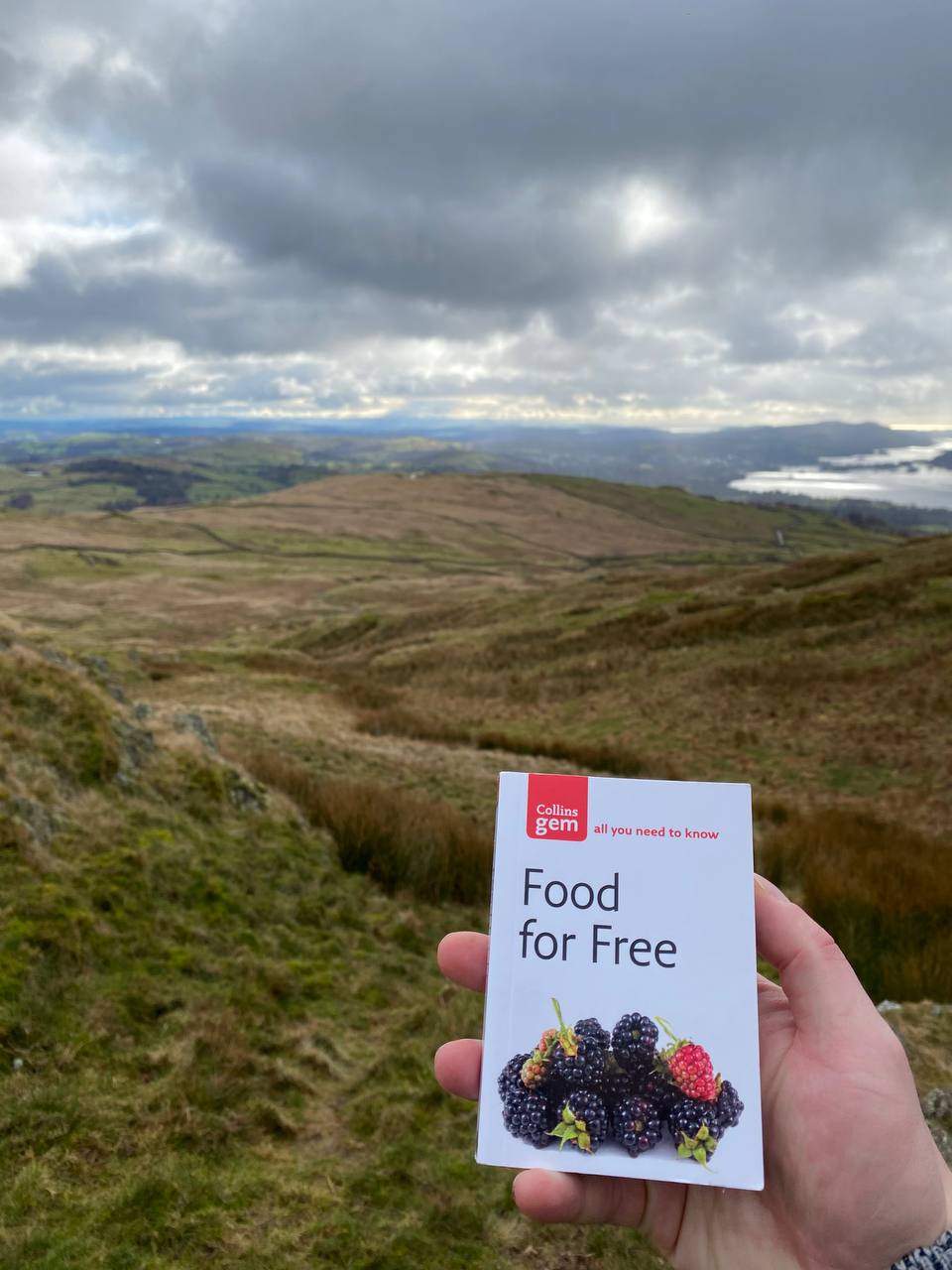 Food for free by Richard Mabey was published half a century ago, but seems like the woodlands didn’t change much ever since, so it is still rather useful.

It could have been organised better (the items are in chronological order while it’d be way more useful if split by harvest months), but it fits into a pocket and has a bunch of usage suggestions fit for a Michelin-level cuisine:

The young April leaves of the hawthorn are probably the first wild vegetable a country child eats, and in England they are wildly known as ‘bread and cheese’. This hasn’t anything to do with the taste of the leaves, and is probably a metaphor for their character as a very basic foodstuff. (Some hardy children eat the older leaves, the bread, together with the young red berries, like Dutch cheeses, in late summer).

Partly thanks to this book I already found a bush of fresh juniper — so cool (and such a shame it is too early for berries).

## Thank you and see you in a week! If you have any questions, or want to suggest a link for the next newsletter, please drop me [a message on Twitter](https://twitter.com/intent/follow?screen_name=Valzevul) or reply to this email.